News Uttarakhand: Locust were curried in Shahjahanabad in 1960s’ 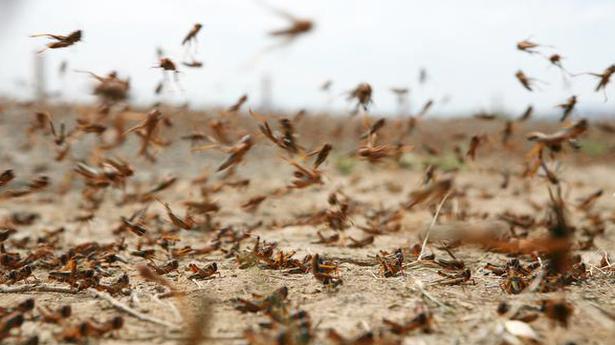 Allaudin saab was seven or eight years old when he remembers throwing up a wet towel in the air at thousands of tiddis or tiddas (locusts) flying fast over his home near Delite Cinema in Shahjahanabad (Old Delhi). The locust infestation had been terrible in those years of 1964 and 1965, and he remembers that it was in 1964 that Pandit Nehru died.

Allaudinji’s wet towel would hit the locusts and many of the insects would be bought down to the floor of his chhath (terrace) with a soft thud, some trying to escape the weight of the heavy towel. Repeating his wet towel ‘throw’ over and over again, he would collect about 35-40 in a small cloth bag. Then his mother would pull out the spiky, spindly legs and broad wings, snap off the head and the soft posterior part and blanch the insects in water. Frying chopped onions and tomatoes in oil with garam masala, as she would for kaleji (Goat Liver) fry, she would add the blanched locusts and make a slightly moist dish. “It would taste like a juicy and crunchy chicken neck,” says Allaudinji.

For him and his friends though, it wasn’t so much the dish or its taste, but the fun of bragging about who caught and ate the maximum number. Tiddis are the common grasshopper, but being very similar in size and shape, locusts are also referred to by the same name. Allaudinji’s son Mehtab says that in Persian, locusts are called malakh.

The same year Prof. Anis Hasan, an octogenarian who has lived near the Jama Masjid all his life, reckons he was about 24 years old then. “A friend, an Afghan Pathan suggested we put up nets at night on the haveli terrace to catch tiddis,” he remembers. In Afghanistan, locust attacks were frequent and he remembers his friend telling him that when their crops were destroyed by the locusts, it was by eating the locusts that Afghans would sustain themselves.

Now Hasanji, belonging to a family of Khan Bahadurs (a title bestowed on the family by the British), with a rich heritage of indulging in diverse cuisines from India and around the world, was eager to try out his friend’s idea. Preparations were instantly made for that night and a sizeable number of locusts were caught in the nets over a period of two days. After removing the usual inedible parts of the insect like wings and legs, his family khansama (cook) sautéed them in ghee, sprinkled on them some dry masala, and he remembers a “crunchy, spicy snack”.

Hasanji and his family now run a food service called Delhi 6 – Royal Cuisine of the Walled City, though they don’t have locust on the menu! They do have a mean nihari and mutanjan (on order).

Hasanji’s daughter-in-law, Imane, who is Moroccan, says that back in her country, jarad (Arabic for locusts) would be such a menace in certain years, that shops in the bazaars would sell them by the bagful. At home, they would boil the locusts in water for a while and instead of the whole body, they would fry the lower body which had eggs, as it was considered the most nutritious and delicious.

The Food and Agriculture Organization says that “About 62% of the dry weight of an adult Desert Locust consists of proteins, 17% as fats…”

Mehtab says locusts are considered halal in Islam, referring to a fable that he was told as a child about the Prophet Abraham. God asked Abraham to sacrifice what was most precious to him. So the prophet took his son Ishmael to a mountain top to perform the sacrifice. The knife would not cut and god appeared to say that he was just testing Abraham’s loyalty to him. The knife fell on a few animals beneath, of which the locust was the only insect, and is thus considered halal, or suitable for consumption. He clarifies that the Quran doesn’t support this story. Besides, Hasanji adds, “I can make hundreds of tasty meat, fish, and chicken dishes, why eat a tiddi!”

A Hadith (saying) of Prophet Mohammad has reference to locusts being halal in books like Sunan Ibn-e-Majah (Hadith: 3222 Authority of Abu Hurairah) which says, “We went out with the Prophet for Hajj or Umrah, and we encountered a swarm of locusts. We started hitting them with our whips and sandals. The Prophet said: ‘Eat them for they are the game of the sea.’”

In the Bible, John the Baptist, who Christians believe came to “Prepare the way for the Lord,” lived in the wilderness, eating locusts and wild honey (Mathew 3:4). In the Old Testament’s Book of Exodus, locusts are cited as one of the plagues god unleashed on the Egyptians, each time the Pharaoh promised to let the Israelites go and then withdrew it.

The author is co-founder DelhiByFoot Adventures (DBF). He revels in immersing himself in the Capital’s rich culture, history, and food

You have reached your limit for free articles this month.

Find mobile-friendly version of articles from the day’s newspaper in one easy-to-read list.

Enjoy reading as many articles as you wish without any limitations.

A select list of articles that match your interests and tastes.

Move smoothly between articles as our pages load instantly.

A one-stop-shop for seeing the latest updates, and managing your preferences.

We brief you on the latest and most important developments, three times a day.

Not convinced? Know why you should pay for news.

*Our Digital Subscription plans do not currently include the e-paper ,crossword, iPhone, iPad mobile applications and print. Our plans enhance your reading experience.